How Pyrotek thrives in an industry that demands new ideas every day.

The pace of innovation in the live-event special effects industry has been relentless for nearly a decade. To understand why, we have to first understand major disruptions in the music industry. Like everything else you’re reading right now, it starts with Millennials.

In short: They’re not buying music the same way their predecessors did. Millennials (now joined by Gen Z) are still paying to listen to music and consuming it – but in a different way. Instead of buying tangible albums, they are perfectly happy to stream their music for a subscription fee. These Millennials are then taking their ‘experiences-not-things’ mentalities and coming out to concerts. In droves. And if you’re paying attention to climbing ticket prices – which are up 14% over last year – you know these young crowds are willing to spend a lot to see a good show.

Musical artists are responding to the demand by booking more concerts. They have to. Not only because their fans are expecting it, but because concerts are now their main profit center. Gone are the days when bands would tour to sell albums. The business model has shifted to a point where the music, at least in part, sells the tour. With more shows on the road, the landscape becomes more competitive, pushing artists to find new ways to stand out and make shows more memorable (and Instagramable).

This is why we’re seeing artists like Taylor Swift rent 52 semi-trucks for gear, and 30 more flatbed trucks to haul the stage for her Reputation tour.

Which brings us back to special effects. Nothing against a good unplugged set, but people aren’t lining up in droves to see AC/DC sing a cappella on a lifeless stage for 90 minutes. People want the flames, the lasers, the smoke, the confetti and the waterfalls; these elements are inextricable from the experience audiences crave. In fact, nearly 20% of the 16,328 concert-goers we surveyed said they would pay more to see great special effects (which is saying something when the average ticket price is $96).

The high demand for live special effects leaves companies like ours in a great place from a business point of view, but it doesn’t come without pressure. If audiences are looking for unforgettable experiences, and touring artists (whose careers live and die on reinvention) have to stand out, we are on the hook for finding new ways to bring those big moments. Every single time.

It’s not a question of whether we should innovate, it’s how we do it.

The Softer Side of Pyromania

There are two areas of innovation in special effects: science and art. We talk more about the science side – because it’s what makes fire rain down from the sky – but the art side of our work is what actually generates most of the new ideas we bring to life.

Equipment will always be important, but knowing how to ignite a powerful fire effect is meaningless if you have no sense of whether or not you should.

Designing a special effects show requires emotional intelligence and raw talent. Designers not only have to understand music, mood, timing and storytelling; they also have to be creative enough to express that understanding in different ways. Not every band comes to the table with ideas; they might have a general look they want to create, but special effects artists have to have vision.

Like other art forms, special effects is about translating feelings into experiences for an audience. Confetti, then, is less about falling paper and more about happiness. That might sound basic but emotions have nuances. The innovation comes in envisioning how an effect like fire, for example, communicates the type of intensity—which depends on how it syncs with other audio or visual elements; where the flames come from; how tall they are; their color and shape, etc. There’s no limit to how these combinations can come together, especially when you start adding other inspirational pieces like, say, a giant floating skull.

Because the creative possibilities are limitless, one of the first steps in designing special effects for a concert is to get to know the artists. It gives us a good foundation to build our thinking. We incorporate elements of their personalities, their message, the mood of the show. From there, we get into the details of each song. (There are practical details of this process, too—such as determining venue size, scale, budget and timing—which give our creativity some parameters.)

The Grammys is a good example of working with different artists to create completely different experiences, but in the same venue. If you recall the 2018 Grammy Awards, Kendrick Lamar (featuring Dave Chappelle and U2) opened the show with a performance that was political, comical and entertaining. To help tell his story, we used an array of stationary flame units to generate intense flame cues; red falling stars to symbolize a battle; and white flashes with bangs to simulate gunfire during the set’s incredible finale.

Changing gears for Bruno Mars’ and Cardi B’s energetic Finesse remix, we captured the early ’90s vibe with vibrantly colored mines (comet effects). When SZA sang Broken Clocks, we used a wall of silver torch falls to complement the elegance in her stirring performance. Finally, for Luis Fonsi and Daddy Yankee’s performance of Despacito, we featured silver and red comets, and cryo jet cues that matched the incredible rhythm, bringing the beat to life visually.

Back to the Good Stuff

The creative vision for each show is always the backbone of innovation, but if that vision calls for an effect that our equipment can’t handle – or could do better – we start building.

This is when the science takes over, and we get into the shop to figure out how to make that blast a little bigger. You can imagine how fun this is, but you can also image how serious it is to work with fire and explosives. Safety is absolutely priority number one when we are designing and building new equipment. Everything has to be tested rigorously. Even a slight modification means starting the testing phase all over again.

Here’s an example. We were working on a custom-fabricated flaming sign for the Trans-Siberian Orchestra for their 2019 tour, and we had to paint it (red). So we applied a high-temperature coating over the paint. We had never painted that particular piece of equipment before, so we had to be sure that the coating would stand up to high-heat exposure for extended durations. To test it, the innovation team literally replicated the burn cycle of the band’s entire tour for each sign – one for each coast. And that was just to paint something red.

(It is worth mentioning that special effects equipment isn’t all explosives; computers are deeply ingrained in enhancing what we offer, especially when it comes to ensuring precision in timing and choreography. The ability to program individual firing systems adds sophistication to our shows, as well as another layer of expertise needed to work in our field.)

A lot of the R&D we do involves making upgrades and/or adding new attachments to existing equipment. But we have been fortunate (and hard-working) enough to have brought several original, core innovations to the field. Our inspiration comes from constantly thinking about what hasn’t been done, and building on what has to create those high-impact moments for audiences.

We actually just came out with two new systems.

First is the Kinetic Wave 2.0. It’s technically an upgrade of the 1.0, but this version incorporates new technology that produces entirely different effects. The first-generation Kinetic Wave let designers create a “moving” gerb waterfall (of sparks). The Kinetic Wave 2.0 uses independent and programmable control to enable a wider range of movement options, allowing designers to create new realms of visual display.

Creative design options now include waves, cascades and moving curtains, circles and arches (perfect for entrances and reveals). Each unit allows precision control over deflection angle, speed and acceleration, and is capable of full 360-degree rotation.

The second system is the XL Cryo Jet, which offers designers access to a cryo jet plume that is thicker and up to 25% higher than standard cryogenic jets. It’s a better option for low-humidity environments due to larger output levels.

See You Out There

Creativity and innovation never stand still. In the live-performance industry, if you don’t keep up with, or set, the pace, you’ll be left behind. That’s why we’re constantly pushing boundaries, integrating new technologies and giving audiences new experiences that will shock and awe and make a lasting impression. It’s what we’re known for and what we strive for – with every show we do. There are always more ideas and cutting-edge systems coming from our team, and only time will tell what the next innovation will look like – so keep your eyes on us. In the meantime, we’ll see you on the road!

Here’s a short list of other innovations we have brought to the special effects market over the years—all of which are still in regular rotation on stages across the world.

The Dragon is a platform for propane-fueled flame effects that combines with various attachments, depending on the desired effect. It was a game changer for the industry because it was the first turnkey propane effects system that could be set up and taken down efficiently, and that had the requisite monitoring and safety features. The Dragon remains the leading system for propane-fueled flame effects in the industry.

The Firescreen is a linear module of individually programmable output valves connected to a back-end fuel delivery system. It can produce various propane flame effects—each operating at its own programmed speed and height, creating fire balls, chasing flames, lazy flames and walls of fire up to eight feet tall. The Firescreen remains the only innovation of its kind with this degree of variety and programming flexibility.

AquaVisual Fx is a patented water display system that creates imagery in the air with falling water. It uses a series of independently programmable output valves combined with a water management and delivery system.

High-output Laser Arrays: Laser arrays tend to have low output levels (in terms of wattage), making them an underwhelming effect, particularly when integrated with very active lighting and video elements. Pyrotek overcame this challenge by developing a linear array of higher-output (7W) lasers that work brilliantly. They have become a mainstay on the Trans-Siberian Orchestra’s show. 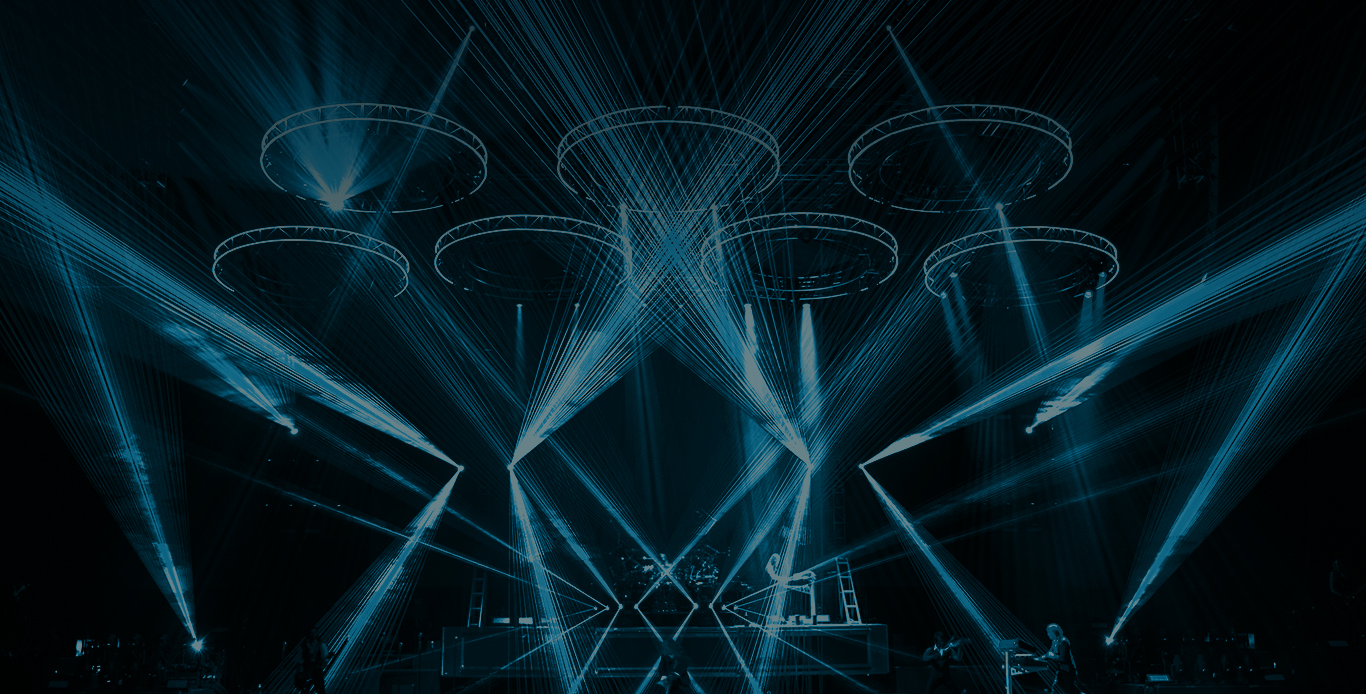 Expectation vs. Reality: How Pyrotek Achieves Both

What’s really exciting (and challenging) for us is creating an idea so big and so realistic that it has the power to create a reaction. It’s one thing to dream up an idea. It’s another to take that dream and make it real. We specialize in both.